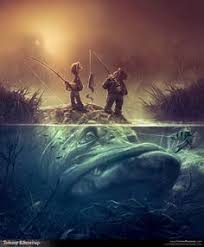 NOTHING MAKES A MUSKY BIGGER THAN ALMOST BEING CAUGHT!

Excitement and disappointment have a way of making the size of muskies grow a bit! So many times over the years I’ve heard fish stories of monster muskies that were hooked, yet for some reason got away. While many lost muskies were reported to be “5 footers” or ” 60 pounders “, I seriously doubt that any of these so called monsters would have tipped the scales at more than 45 pounds.

So the question is not so much, “Do they exist”? I’m sure they do! More to the point would be, “Can they be caught on a hook and line?

Have you ever met a Musky Hunter that did not exaggerate about the “One That Got A Way?” How about the ones that did not get a weigh, and I  do mean weigh?  All they do is guess the weight. Like the time a fishing buddy of mine caught a 33″ Musky that looked to be about 12 pounds.  He just guessed the weight, had it mounted, and called it twenty pounds!

One time, years ago, a friend of mine caught a 22 pound pee-nut and kept it to be mounted instead of releasing it. A couple years after that, I saw the mount in his family room. His  lie under the mount said the Musky was 26 pounds! Knowing him, I think he was too embarrassed to note the true weight.

We ask a simple question and that is all we wish: Are all fishermen all liars? Or do only liars fish?

Is it possible for someone to catch a 70 pound musky? My answer to this question is a definite yes.  Most expert guides and other so called authorities  believe that there are a few swimming in our waters somewhere in the Great Lakes of  Wisconsin, Michigan, New York (St.Lawrence), Minnesota and Canada. There are some good Musky lakes south of the Great Lakes that could hold a record as well.

DNR’S,  Ecologist and Indians have netted Muskies over seventy pounds as actual proof the coveted record  does exist. However, their are so few of them, the chance of catching one on hook and line is so remote that most Musky Hunters think it would be like winning the Power Ball Lottery!

Here is  part of an article that appeared 14 years ago in a Musky Hunter Magazine, written by the editor and expert Musky guide Joe Bucher:

“For well over 16 years, I guided for muskies full time. In fact, for the first eight years I fished 7 days a week throughout the entire fishing season. During this time, I saw, hooked, caught, and lost LOTS of muskies, of course. I’m sure most would agree that I took as many numbers and big fish as anyone during this time span. During all the time, I only saw ONE musky that I am certain was over 50 pounds. That’s right, in 16 years of full time musky guiding only one legitimate 50 plus pounder was sighted. However, I did see a number of 40 pounders each season. At the same time I sincerely believe that most anglers who saw these same fish claimed they were 10 to fifteen heavier than what they actually were. The one 50-pound-class monster I did observe was also sighted by two other anglers fishing with me that memorable hot July afternoon. It followed a jerk bait, and slowly passed under the boat. All three of us watched her majestically cruise by. Even though I chased that monster for quite some time afterward, I never saw it again.”

The reasons a true modern World Record has not been caught yet are many, and will be written about at length in another article.

Note: There has been a new World record Tiger Musky caught: