HOW TO CATCH BLUE MARLIN 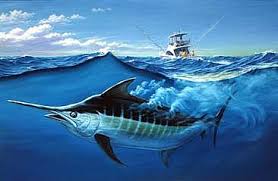 These are the tournaments for the “big boys” of competitive saltwater fishing. Fishing for Blue Marlin can also be the most boring and monotonous form of fishing known to man if you don’t know what you’re doing. Often trolling for hours on end without reward. Then boom! Marlin fishing has been described as “hours of boredom interrupted by seconds of sheer terror.”

Catching A Blue Marlin in the Gulf of Mexico

In the Gulf, the prime Blue Marlin fishing grounds are generally along the “100 fathom” curve. To land lovers, that’s 600 feet of water. The full story is that Blue Marlin can be found in water as shallow as 250 feet and anywhere deeper than 250. Blue Marlin are almost always caught by sport fishermen while trolling during daylight hours. Volumes have been written about trolling methods. In the Gulf of Mexico, we typically “pull” 5 to 7 baits in the “pattern.” The bait pulled farthest behind the boat, about 150 feet, extends from the rod in the center of the back of the fighting chair and is connected to the “center rigger” – an outrigger that sticks straight back for the top of the flybridge – by a “tag line.” The 2 baits set next farthest back behind the boat are the left and right “long riggers.” They come from the rods on the left and right sides of the back of the fighting chair and are “run out” on the “roller trollers” to the very tips of the left and right outriggers, respectively. The 2 rods that sit in the rod holders in the middle of the left and right gunnels are attached to the tag lines that run back from the halfway point on each of the left and right riggers. The “flat lines” are the optional 6th and 7th lines, are run from the back rod holders on each of the gunnels and are the shortest and lowest lines. All this seems unduly complicated, but it all works together to spread the lures out from each other both vertically and horizontally and magically keep the lines from tangling when the boat turns.

The lure pulled from the center rigger is, almost universally in the Gulf of Mexico, an Islander/ballyhoo combination, sometimes behind a “bird.” The long riggers are usually skirted trolling lures like Pakulas or Black Barts, but sometimes folks use Islander/ballyhoo combos there too. The short riggers are usually larger trolling lures. The flat lines are often wahoo baits, like MyLure/ballyhoo combos. We often pull teasers when trolling for Blue Marlin as well. The reels we use are Penns. We use 50s, 70s and 80s, with 2-speed capability. Altogether, there’s about $20,000 worth of tournament-grade tackle employed in the cockpit at any given moment.

Where to Catch Blue Marlin in the Gulf of Mexico

We generally catch Blue Marlin around either offshore production platforms or bottom structures. We have GPS coordinates galore for all these spots. Basically, we just get there and put the lines out and troll until we get hit.

When the big Blue hits, every one knows it instantly. There is no doubt. The line is ripped out of the rigger and starts screaming off that reel. The captain starts screaming “big fish on”. The mate charges the rod that’s going off and is bent over. The chosen angler gets situated in the fighter chair, as line continues to spool off the rod. The mate places the butt of the loaded rod in the fighting chair gimble mount and fastens the clips from the fighting chair bucket to the eyes on the top of the reel. Only then does the captain slow the forward motion of the boat.

The Art of Reeling in a Blue Marlin

Then, the fight is on. If the angler is not a veteran, you can bet that everyone in the cockpit and on the fly bridge is yelling for him or her to “reel, reel, reel.” All the crew is keenly aware that the anglers must keep constant pressure on the fish or risk the fish “throwing” the J hook right out of its mouth with a head shake. What most rookies don’t know is that the captain will keep push up the throttle and speed the boat ahead, unless the angler demonstrates that he can keep the rod bent without the boat moving forward. This just helps the fish spool off more line and explains why most people take 45 minutes or more to land a Blue Marlin. They are fighting the captain, not the fish. As soon as the other lines are cleared by the cockpit crew and the angler demonstrates to the captain that he can keep the rod bent by reeling, the captain will back the boat to the fish as the angler rapidly and easily gets back all but the last 50 feet of line. At which point, the fish is all done jumping and has gone down 45 feet deep right behind and below the stern of the boat. Fighting the fish up those last 50 feet is a skill within itself. This is where the novice angler has to learn to “pump and reel” or “short stroke.” Otherwise, the last 50 feet will take forever, with the fish pulling back every foot of line the angler takes up. The short stroke technique is where the angler raises the rod about 15 degrees and reels like crazy for one turn of the crank as he lowers the rod tip back down those 15 degrees and rapidly repeats that process one crank after the other until the last 45 feet of line is won and the leader is reached by the “wire man.” When the leader can be reached by the wire man, he will pull the fish up beside the boat for pictures and high fives. Sometimes really wild stuff happens when the wire man grabs the leader, like an all new airshow if the fish is still “green” or the fish making a new run and the wire man having to “dump” the leader. If the wire man dumps, the angler will have to fight the fish again, back up to the leader and the wire man will have to try again. Regardless, it is an official catch and release under tournament rules as soon as the wire man touches the leader the first time. No time to rest after landing that first Marlin. The crew scrambles to get the line back into to the water for a second fish. Our best Blue Marlin day on Paparda Rey is 5 Blue Marlin, including a double. That’s right there’s only one fighting chair. I had to fight the second Marlin in stand-up gear. Basically, I just let him run at distance while the guest angler, Bud Scherr, landed the first Marlin. We then just backed down on the second Marlin.