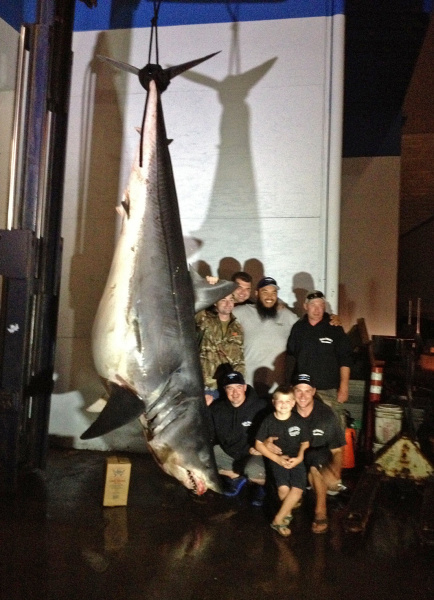 Good Lord! I’m glad this  gigantic shark was not caught in one of our GREAT LAKES!

A sport-fisherman reeled in this huge Mako Shark off the Southern California coast that tipped scales and threatened records. But conservationists criticized the catch, saying shark populations are vulnerable to over fishing worldwide.

The female shark caught Monday off Huntington Beach weighed in at just over 1,323 pounds. It was 11 feet long and measured 8 feet around its thick midsection, said Kent Williams, a California-certified fish weight master and owner of New Fish all Bait, where the shark was taken for frozen storage.

Jason Johnston, of Mesquite, Texas, caught the massive fish after a 2 1/2-hour battle, the Orange County Register reported.
If the catch is confirmed and meets conditions — a process that takes about two months — it would exceed the 1,221-pound record Mako catch made in July 2001 off the coast of Chatham, Mass., said Jack Vitek, world records coordinator for the Florida-based International Game Fish Association told the Los Angeles Times.

Under state law, anglers can take two such sharks per outing, although such catches are exceedingly rare, Williams said.

“Ninety-nine out of 100 people who are out fishing for sharks catch this and will not be able to land it,” he told The Associated Press.

On Wednesday, angry callers from as far away as Australia were phoning Williams’ business to complain.

David McGuire, director of the California-based protection advocacy group Shark Stewards, said it should have been released.

“People should be viewing these sharks as wonderful animals” rather than “spilling their blood and guts,” McGuire told the Times.

But any sport fisherman who might have a world record is not going to release it, Williams said. “If they have a potential world record, they’re going to take that fish — if they can.”

Only 23 of the 6,850 world records on file with the game association involve fish topping 1,300 pounds, Vitek said. The largest catch was a 2,664-pound great white shark that was taken off Australia in 1959.

Johnston came to California to film a game-hunting television program called “Jim Shockey’s The Professionals” for the Outdoor Channel.

Southern California is considered to be a nursery ground for Mako Sharks, but most are  no bigger than 6 feet long, said Nick Wegner, a fisheries research biologist at Scripps Institution of Oceanography in San Diego.

“Encountering one this big is rare,” he said.