They say (I’M NOT SURE WHO THEY IS) that there are more fish species in the world than any other group of vertebrates. And they are all different, have different characteristics and can be fished in different ways. 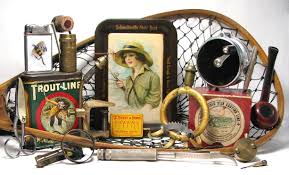 There is evidence that Tianyuan man (whose bones are old from between 42,000 and 39,000 years) used to regularly eat freshwater fish. Most of the people of that time lived a hunter-gatherer lifestyle and they moved a lot but their permanent settlements shell middens, discarded fish bones and cave paintings which show that they fished salt and freshwater fish. Southern France has caves and cave art that is over 16,000 years old and represents marine animals and spearfishing with barbed poles (harpoons). Early ways of the main fishing methods started appearing in the Neolithic times between 8,000 and 4,000 years ago. For instance, one of the earliest fishing hooks was gorge hook used by Native Americans of the California coast between 7500 to 3000 years ago. Some other tribes used plant toxins to numb the fish and fish it out easily. Harappans (people that lived during the Bronze Age at the place of today’s archaeological site in Punjab, eastern Pakistan,) used one of the first bronze harpoons.

Ancient Egypt, as we know, was on the Nile and heavily depended on it for its fish. Methods of fishing used on the Nile are shown on the walls of tombs, on drawings, and papyrus documents. Ancient Egyptians fished from small reed ships Nile perch, catfish and eels and used woven nets, weir baskets, harpoons, and hook and line to catch them. First metal barbed fish hooks appeared during the 12th dynasty.

Ancient Greeks considered fisherman of very low status so they rarely depicted them in art. Despite of this, Museum of Fine Arts, Boston, has a Greek wine cup from 500 BC that shows a boy that crouches on a rock and has a fishing-rod in his hand and a fish trap in water below him. Basically – all civilizations that lived near the water have developed some forms of fishing and relied on fish as a part of their diet to some extent.

It is not known when commercial fishing started but what was characteristic for it was that it used types of fishing which allowed for a larger catch. To do that, fishermen used gillnets which existed from ancient times. They were used in Middle East, North America and other places and are still used in Pacific Northwest, Canada, and Alaska. Early fishermen used nets close to the coast but with improvements in navigation and communication devices, mobility of fishing vessels increased largely and they started conquering the oceans. Beside fish, catch of commercial fishermen are sea cucumbers (so called “trepanging”) for markets of Southern China and the rest of Southeast Asia (they are used there as flavor-enhancers and aphrodisiacs).

Except primarily for food, fishing is used as recreational activity. The first mention of recreational fishing dates from 15th century and it comes from essay “Treatyse of Fysshynge wyth an Angle” by Dame Juliana Berners, the prioress of the Benedictine Sopwell Nunnery. This type of fishing became popular during the 16th and 17th centuries and it was performed on rivers and lakes. When the first motorboats appeared in 19th century, big-game fishing started to be popular. Dr. Charles Frederick Holder, a marine biologist and early conservationist is considered an inventor of this branch of fishing.

Fishing is still today popular – as a sport and as a part of economy of some countries. FAO statistics put the total number of fishermen and fish farmers to somewhere around 38 million.

With all of the modern gadgetry most anglers rely on these days, it can come as quite a shock that fishing has been around for about 40,000 years. Analysis performed on skeletal remains dating from that period in pre-history have shown that people were eating fish – and plenty of it. But that’s not the only evidence we have of humanity turning to the sea for sustenance. Discarded fish bones and shells piled high demonstrate that we’ve been eating fish for a long time. Cave paintings – the closest thing we have to a prehistoric postcard – clearly show people catching and eating fish. Fishing may have even played a role in readying humanity for the transition from a nomadic lifestyle to permanent settlements. In almost all known instances of early long-term human settlements, fishing provided the kind of access to food that made roaming unnecessary.

Early anglers had their own gadgets, of course. Harpoons and spearfishing implements were in widespread use during paleolithic times. Over 16,000 years ago, ancient anglers depicted images of people using harpoons in Cosquer cave in Southern France. As Neolithic culture and technology spread between 4,000 and 8,000 years ago, humanity began to develop some of the basic fishing tools that are still in use today. From 7500 to 3000 years ago, for example, Native Americans on the Pacific coast were using hook and line tackle and plant-derived chemical to make fish easier to catch. The Egyptians invented all kinds of fishing methods and tools – many of which they illustrated in tomb scenes, drawings, and scrolls – including metal hooks. There are even depictions of fishing that suggest it wasn’t just about eating, but also having fun!

There’s no real lesson to be found in the early history of fishing. We wanted to share it here because it’s exciting to think that when we head out onto the water, we’re following in the footsteps of our earliest ancestors… even when we’re just fishing for fun. Fishing for fun was not what they had in mind however. Our ancestors were meat fisherman, not by choice, but just to exist.