Carp On The Fly 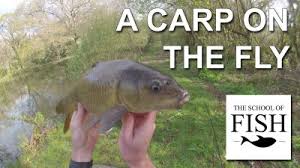 When You catch A Feeding Carp with A Fly Rod, you will experience the fight of a lifetime! Carp never stop fighting until they are dead…..

Once, after two hours of back breaking work, I caught a 25 LB. Carp while fishing with a fly rod for crappie on Lake Geneva, Wisconsin. I really thought it had to be the biggest Northern Pike in the lake until I actually saw the back of the fish…..It was the best fighting freshwater fish I ever caught, and that includes the fight from a 23 LB. Steelhead Trout, a 29 Lb. King Salmon and a 32 LB. Musky. Carp just never give up!

Carp in most regions move to the shallows with the warming waters of late spring, which makes May and June prime time. You’ll sometimes see small groups of them spawning with splashing flurries as they broadcast their eggs in the weedy areas of coves and bays. More often, though, they’ll be cruising the shallows, feeding on aquatic nymphs and crayfish along the bottom.

Carp are smarter than freshwater bass, which is probably a shocking revelation to avid sport fishermen. In lab tests measuring the rate at which fish can learn things, carp have figured out simple tasks almost twice as fast as bass. That will explain, in part, why carp can be so hard to fool with a fly.

They are also the largest fish many freshwater anglers are likely to encounter. The IGFA all-tackle record for common carp stands at 75 pounds 11 ounces, taken from a French lake in 1987. What’s really mind-blowing, though, are the IGFA fly-rod carp records.

Carp are members of the Cyprinid family, which also includes minnows. There is a huge variety of species worldwide. The fabled mahseer of India’s mountain rivers, one of the world’s hardest-fighting game fish, is a carp. In this country you’re most likely to encounter common carp or sometimes grass carp, an Asian import introduced in the 1960s for its role as a vegetarian in controlling aquatic weeds. Black, bighead, and silver carp are more recent introductions in the upper Mississippi.

Lake Michigan’s Grand Traverse Bay near Traverse City in northwestern Michigan has broad, clear flats that are perfect for carp. It’s easy to spot the occasional pod of three to 10 dark-bronze fish walking the shoreline.

You’ll need to find some happy fish, meaning actively feeding carp. Cruising schools or fish simply sitting still in the sunlight aren’t feeding and are usually difficult to entice with a fly. You can find some carp located in about 2 feet of water that were obviously working the bottom with noses down and tails gently breaking the surface. That’s what you want! Those fish can be caught.”

Carp eat in other ways, too, and it’s sometimes possible to find them actually surface feeding in a still pond or river backwater. An extensive hatch or spinner fall of mayflies can bring carp to the top, as can round, purple mulberries dropping into the water from overhanging bushes. Breadcrumbs tossed by children for ducks in urban parks can also do the trick, for that matter.

Clear water and feeding fish: Find these two prerequisites, and your chances of taking carp on the fly have improved dramatically.

Try Lake Geneva, Wisconsin…..It’s loaded with carp! I’m actually sorry to say, it is such a nice fishing lake.