Lots of weird stuff happens after dark. Musky hunters run over logs. scare off skinny dippers, hook bats, step off the end of docks, pour coffee in their laps, and once in a while and on rare occasion, actually catch a legal musky. Since catching fish only takes about 2% of their time and all other stuff takes about 98%, most musky hunters adjust their tackle and techniques for night conditions.

Happily for those of you that have to work for a living, the best fishing times for muskies occur during those summer vacation months when you are most likely to get away.

On the other hand, the exceptional results recorded during the months of June, July and August may well be related to the fact that that is exactly when most musky hunters can get away to try for a trophy musky.

Whatever the case, be assured that that those summer vacation days are when muskies are in a feeding mood, and happy to see your tempting lures.

Most seasons June is the better month over July and August mostly because of water temperature. September is a fantastic time for bigger muskies, although because of school and family obligations there are less musky hunters fishing.

Pending weather conditions, I think that October is the best bet to nail a trophy sized musky!

Naturally, the best time to go fishing for Musky is when you can get away, but here is a guide for those that have a choice: 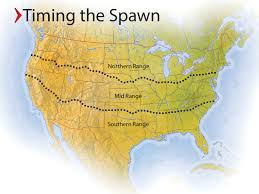 The Calendar divides the fishing year into 10 periods of fish response. These Calendar Periods are at the mercy of Mother Nature, so there is no certain number of days, nor do they occur on specific dates each year. Since Calendar Periods depend on climate and water conditions, they will vary in length from year to year depending on weather trends. Calendar Periods could last a few days one year and last several weeks the next year.

As you might have guessed, Calendar Periods vary according to regions. In areas of Canada, the Summer calendar period might arrive in July and last a few weeks. Meanwhile in Florida, the Summer period may arrive in May and last for over 5 months.

Recognizing seasonal movements and fish response patterns are important to fishing success. Learn to read the signs, and you’ll be able to identify one period from another to determine when various species are in different Calendar  Periods.

Fish Activity During The 10 Calendar Periods