Back in the day, up in the Ontario bush a contest for the “weirdest-lure was won by a person that caught an eight-pound Northern Pike on a red toothbrush with a treble hook!

Sort of tells you that a Northern Pike can and will hit just about anything you want to throw! 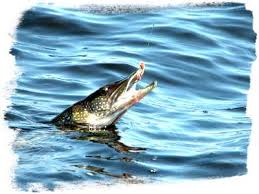 Don’t think for one minute that a trophy Northern pike is that easy to catch!  A twenty pound  ‘Jack’ can be a task that is only equaled by capturing a thirty pound Musky. The two fish are sometimes confused with each other, but their looks it where it ends. These two fish have their own sets of breading and feeding habits. Indeed it is true, it is probably a lot easier to catch a small northern, than is is to catch even a small Musky. A big northern fights harder, in my opinion, than a big Musky of the same length and weight.  The twenty-two lb Northern Pike I caught fought harder and longer than a thirty-two lb Musky I nailed on the same fishing trip, on the same lake!

Sure many lakes in Illinois and deeper south have good populations of the furious Northern Pike.  However, many of the lakes in Wisconsin, Michigan, Minnesota and Canada have a bigger population. Not only are there more  Northern Pike caught up north, but I think they run much larger. Also, the lakes up north are bigger, deeper and cooler for the most part. I think that it why the powerful fish got its name,”Northern Pike!”

Back in 2007  a friend and I  made the fourteen hour trip up to the fantastic Lake Of  The Woods Canada, in hopes of nailing a trophy Musky.   What ensued sort of backs up my thoughts of Northern Pike being bigger up north….. After launching our boat out of Nester Falls, we saw a large weed bed just left of the ramp.  We were so anxious to do some fishing, we thought we would make a couple casts before heading to our lodge….. I attached a big 13″ Musky lure I designed and built for the trip.  Well, to make the story short, this is what happened: I made a cast in the middle of the weed bed. After letting my lure sink a little we saw a large boil near were the lure landed. Something big made a pass at my lure….. I quickly retrieved  it and made a long cast just beyond were we saw the boil. Bingo!  A  fish attacked my offering like a run-away fright train!  Thinking that it was a good size Musky, I was pretty excited. I fought the fish for close to a half  hour and finally we netted a fat twenty-two pound Northern Pike along with about five pounds of weeds!  Even though this fish was the biggest Northern I ever caught,  I was stupid enough to think that maybe I would catch a bigger one some day, so I quickly released the beast…..It was starting to get dark, so we made a bee-line across the lake to our lodge. We couldn’t help thinking that the big northern was a sign of  things to come….. Namely a trophy Musky for both of us!