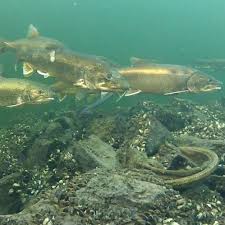 Always remember to check the water temperature. Lakers prefer 43-56 degree water and will generally be somewhere within that range. Lakers are lazy fish, so troll slowly. When marking fish, change trolling speed and direction often , as it triggers strikes. Never assume Lakers aren’t there. Many graphs can’t single them out when they are at the bottom. Experiment continually with lure and attractor combinations.

Positive thinking! Believe the trout will hit as soon as the right depth and speed are presented. Days with a good amount of wave action are better, as the boat imparts more action on the lures. Even though Lake Trout are the easiest of all the Great Lakes sport fish to catch, they don’t just jump in your boat! Experimentation is the key with Lakers! Here is what a well known fishing guide had to say about fishing for Lakers on the reef at Burns Ditch in November. ” Yup!….. Catching Lakers on the reef gets expensive FAST.. You WILL lose a TON of gear if you are fishing right.” “The key is to stay up on top of the reef and troll down close to 1.5 mph. Run a smoke and fire dot dodger with a Spin N Glo, in yellow and white to start Try to run everything right off the the top of the reef. You will be bumping bottom, which is why you lose so much gear. Run dipsys out 20-30 feet, riggers down around 15 feet and three colors of core off planer boards close to the boat. Pull up lines often and check for nicks in the line to help save you some $$$. Run some lures out on boards out to the sides of the reef for bonus fish like Steelhead and Browns.

Always be mindful of your gear! I heard of a guy that snagged  the reef with his four downriggers and it ripped off his trolling board, taking with it a ton of rods and all four riggers. Note: This almost happened to yours truly…..

Trollers and jiggers –Please be considerate of each other. It is a big lake out there. Watch for trolling patterns, markers, etc. Sit and watch a boat-if they are trolling or if you see a marker-to see if there is a boat that is trolling before you pull in on an area. Don’t sit down in someone’s trolling pattern. Likewise if someone is jigging, don’t troll too close. Anchor lines can be out there a long ways. Don’t drag your lines through an area where there are anglers in boats that are jigging. You are going to catch lines. Some anglers like to sit and cast out. If you pull in beside other boats you could be pulling in where they are casting. Ask if they are casting, where their anchor lines are, etc.

Note: It’s a good idea to hire a guide for at least one trip before you venture out on your own. It’s well worth the money just in tackle savings alone…..Good Luck!