Spring Coho (The Wild One) 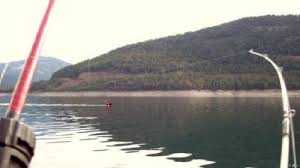 Just after the ice is out in late Winter, and the waters of southern Lake Michigan warm up,  thousands of  Salmon fisherman swarm to the ports of Indiana to troll the shore lines for the “Wild One!, ”  too experience  more fun, excitement and confusion than a power outage at a three ring surface!  Fishing rods go off two and three at a time. Anglers holler, “fish on” while passing rods over and under each other to avoid tangles! If everything goes right, the result is a cooler full of good eating silver bullets. When things go wrong and the Cohos succeed in making shambles of everyone’s tackle, the boat can look like a set from a Three Stooges movie. Coho  fishing is like that!

Spring is the time of year to get those planer boards  and flat lines ready for action!

In spring, the ‘Wild One’s” are coming off a winter fast and begin to increase their feeding range and activity. Once the ice breaks up trolling is superb! It’s the best time of the year for small boat ownershttps://fishingtech101.com/salmons-public-enemy-1/ to limit out on coho. Chinook, stealhead and some brown’s will also be around.  Often the secret to catching fish is to fish near the surface. Here the salmon find warmer water and baitfish . Although the water temperature is below the peak activity range for salmon (45-54 degrees) to feed, the fish sense the warming trend and become aggressive. High-flat lines and planer boards are the way to go for fast ice-out salmon action…..Small Great Lakes trolling flies w/flashers and  fish imitation lures like floating Rapalas work great! I recommend a slower trolling speed than used during summer months. The waters that warm the quickest will hold maurading salmons searching for baitfish.  Coho Salmon strike savagely! On days when the lake is alive with baitfish, feeding gulls and coho chasing lunch, the action lasts up to an hour and if you are fishing when the frenzy occurs, the action is unmatched! The salmon will gorge themselves on baitfish and a few of the crippled ones will swim to the surface. This attracts Sea Gulls, and is a pretty good bet that the salmon are nearby. Savvy lake Michigan trollers know that salmon are not in hugh schools during spring. So, it is important to cover a lot of water while trolling in an effort to intercept scattered pockets of fish. Once lake surface temperatures warm to the 60′s, salmon will migrate to deeper water and form small schools.  This usually begins in late May. The fish are still feeding but they are mostly found suspended over cooler water. This is when downriggers and deep water planers work well. Lead line has become a super producer, as well…..

Pastricks….. East Chicago Marina In Indiana is perhaps the most productive port just after ice out:

Most trollers set lines out as soon as they leave the marina. The Inland Wall holds many fish. Watch for the “First Light”, “Second Light”, and then “the Hole in the Wall”. These are all prime areas. Around the corner to the west is the Shoals. It can get bumpy out there. West of the Shoals is the Shipping Canal which is great spring time fishing. To the east is Buffington Harbor. It’s well protected. Further east, you’ll go past Dean Mitchell, US Steel, and finally Gary Light. These are all great Salmon areas…..If Perch fishing is your thing, the 50 foot deep water outside Gary Light holds lots of monster Perch in spring and fall.

Here again, this port warms up early just after ice out!  This port can be fished all season, with many trophy sized salmon and trout taken every year. This port gets to be kinda busy, but the launches and ramps are in good shape, and well worth the wait….Just outside the ramp is the famous Wall! This is where flat lines and planer boards are super effective, and you can expect action on most days. In early Spring, a two & three man limit is often achieved before noon. Expect a mixed bag of 2-3 pound Coho, 7-13 pound Steelhead and some nice sized Brown trout. This port and the Hammond port are  my best shots in the spring, as they are within an hours drive from my home. When the water warms up…..Limits of Coho and Steelhead are common. If you only have an Illinois Salmon licence, a”Hot Spot” is the warm water discharges out of the 95th St Calumet Park, just S/E of the boat launch.

Wind speed and direction are super important in early spring!

As usual west winds are best, as you will be protected by the shoreline and have calm waters. South, southwest and even northwest winds are productive, also. Light north and northwest winds are ok as well, if they are not too strong.  In most cases, east winds are generally not productive….. take a pass! Instead,  if the ice is out, take a ride to Michigan City…..It  can be a decent bet if there are light east or northeast winds. Use flatlines and planer boards at the warm water near the shorelines and at the mouth of the river…..

Coho, also called “silvers” or “silver salmon,” are another species of Pacific Salmon found in King County. Coho often spawn in the smaller streams and don’t tend to use the larger rivers like chinook. Because spawning coho can be red in color, similar in size, and spawn or travel though the same streams, they can sometimes be confused with sockeye.

Shore fishing this time of year is as effective as fishing from a boat:

Some days when the wind is too heavy for trolling, give it a try from shore.