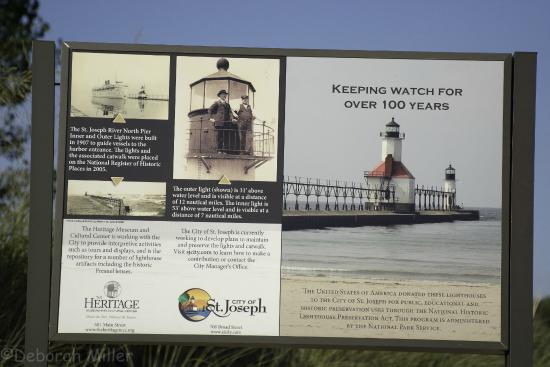 Nearly two centuries old, the historic St. Joe Lighthouse is not only a symbol of the town of Saint Joseph, Michigan but also an icon of the Great Lakes.

The original St. Joseph, MI lighthouse was constructed in 1832, making it the second lighthouse on Lake Michigan. The first St. Joe lighthouse was a single-story dwelling made of stone.

In 1859, a new, two-story lighthouse was built on the bluff of the city of St. Joseph, MI and is considered St. Joe’s first Federal lighthouse. The Red Cross took over the original St. Joe lighthouse in 1924, and from that point until 1955, the structure served as the headquarters for the Red Cross.

The St. Joe lighthouse that tourists and locals alike enjoy today was constructed at the end of a wooden pier extending out into lake Michigan in 1846. In 1907 and 1919 the city built the north and south piers that enabled boats easier access into the mouth of the St. Joe River.

The lights on these piers are still operating today as one of the Great Lake’s last remaining pier range light systems. The catwalk, which was originally built for access to the lighthouse by the keepers during rough seas, is still accessed by walkers, runners and bikers today.