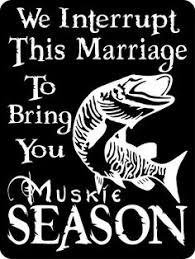 Shortly, the highways to the Musky belt in Wisconsin will be filled with fishing nuts in hopes of and dreaming of catching a trophy sized musky….. Why is the question?

A Musky landed over 20 Pounds would be nothing short of amazing this time of year!

Spring is a fun time to fish if you enjoy being on the water. I suggest that you fish for Walleye! Please read on:

There has been so much written about Musky fishing, you could fill a semi truck with it! Some is just hype or myth, some straight out lies and a whole lot of good publications written by some of your better know Musky guides and a few well versed and experienced Musky hunters. However, at times It’s difficult to separate the truth from the B.S. or even myth.

Indeed the Musky is totally different than any other game fish on earth! It is cunning, unpredictable in its habits and certainly the most difficult game fish to catch on our planet. Can you believe a fish could break the hearts of thousands of die-hard fisherman every year, ruin many a fishing trip, cause a marriage to breakup, loose a friend and a number of other silly things.

What begins as a pleasant sport often ends by being a compulsion and a burning desire, better known as  “MUSKY FEVER”

Musky hunters are a totally different breed than your everyday run-of-the mill fisherman…..Take for instance, bass fisherman. They are generally happy to fish a local community park pond, or even a forest reserve lake. A thrill for them would be to catch a three pound bass! How about your knowing salmon fisherman like myself. I get my kicks by trolling for Coho salmon and Steel head Trout in the spring and big “King” Salmon in the Summer and Fall. Some Walleye fishing guys obsess over a fish of ten lbs. and would be tickled to nail a few 2-4 lb. eyes. One thing we all have in common: WE LIKE TO CATCH FISH!! Mostly for the sport, but maybe to make the old lady happy by bringing them something that can save a few bucks on their grocery bills. Woops! Almost forgot the pan fisherman! Guess that is what they are: fishing for the little dudes to fry up for a tasty treat.

Musky hunters enjoy the actual act of of going on long expensive trips to work their their asses off in hopes of landing a trophy Musky. Most of the time releasing what they catch or not catching a thing! This can, has and will piss off any wife or girl friend. Here you go again leaving your wife and kids at home to go on a long tiring trip to the musky grounds, only to come home with a story of the one that got away! Yes, back in the day when I had the “fever,” I would come home with nothing but a sore body and wondering how I could improve by next hunt.

There is really more to it than that! Trophy Muskies have an unbelievable and uncanny ability to avoid laying on the bottom of your boat. It’s almost as if they have taken lessons on how not to get hooked and how to get off if they do! The big girls are truly experts at doing so…..Many times I have had lines cut in gill plates, lures busted , leader snaps opened.  Could it be that there is a fish angel somewhere up in Musky heaven protecting them? Even when they are doomed, they still have some tricks up their fins, like the time I had a fat legal one leap out of my boat! It is as though they have some kind of special reasoning power.

Although the “mystique’ is many things to many people, I don’t believe there is any one person who can truly explain it. I know I can’t, and I was affected for many years. This mystique transforms seemingly normal human beings into complete maniacs. For some it is only another form of the great sport of fishing. For others it’s converted from that fun loving angling sport to something of an obsession…..This obsession has caused the breakup of marriages and the loss of jobs. Good friends can become dread enemies. I have seen guys throw tackle into lakes, break fishing rods and even give up fishing altogether, because of all the problems that the “obsession’ has caused.

Truly big muskies have become extremely rare! To obsess over something that is mostly unattainable does not make sense. Instead, why not take the activity as just another form of entertainment. Certainly there are other things in this short life that are much more important than ruining your life over a fish! It is when I took my own advise that I finally caught my first Musky over thirty pounds, and it happened in the Fall.

This is my opinion based on many years of fishing for muskies on opening day:

Save your money, time and energy and go when the weather gets warmer, unless you are happy about catching a six to 10 pound peanut that must me released anyway. A musky over twenty pounds is rare in the Spring.

Fish for Walleye instead! We all know that they are not that difficult to catch, and one of the best eating fresh water fish that there is!

Good Luck! Thanks for looking…..