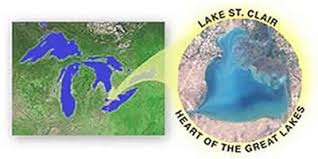 After fishing for Musky in Wisconsin and Canada for many years, I think your best shot to hook up with a trophy Musky,  is at  Lake Saint Clair in Michigan. This super fishery system contains Lake St. Clair,
St. Clair river and Detroit river. Studies have shown that this chain has more musky per square mile than anywhere else in the world.
It’s been reported that there are more than 50,000 Musky over 30” in Lake St Clair alone.
There are a number of factors that exist on Lake St Clair that are the ingredients to a world class musky
fishery. The lake covers 420 square miles, has an  average depth  of only 10 feet, receives a constant flow
of cold clean water from Lake Huron, vast shallow flats that are the perfect spawning grounds, and  71 miles of 20-50ft deep fast flowing current in the St Clair River and Detroit River that are full of musky. These are just a few of the things that makes the Lake St Clair chain such a fantastic Musky fishery.
Also, many years ago it was normal for the lake water to be a muddy color.

Now after the accidental introduction of the zebra mussel the water is at times almost gin clear making it very easy for musky to see and be more efficient at feeding on their prey. But the biggest factor that keeps St Clair as a world class fishery is CATCH AND RELEASE! …..

The Musky season opens the first Saturday in June, so all the “ski” heads, head to the dumping grounds or Anchor Bay. Musky trolling is a little different than trolling for salmon. The lures can be about the size of a shoe tied to heavy braided line with a 24″-36″ steel leader. You can forget about anything mono unless you want to cry all the way home because a monster trophy Musky cut your line in its gill plate!

Trolling can be at a faster pace, like 3-4 mph in the spring & summer months. Slower speeds like 2-3 MPH would get better results in the fall & early winter.  The rods have to be extra stout to hold up to the weight and trolling speed of these large baits.  Later in the season the muskies head to the southern shoreline and the fishermen follow them there. Trolling off the Belle river hump, Stony Point, and over to the Thames River really takes off. The fall is trophy time on Lake St. Clair! The Thames River and the mouth of the south channel are the hottest spots in September until the season closes.

Remember! There could be a World record in these waters. Casting is not the way to go!