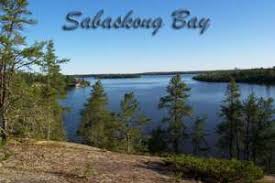 Home of my whopper! A trip to remember…..

Lake of the Woods Canada is a tremendous body of water, covering roughly 951,300 acres. There are over 14,000 islands scattered about the lake and about 52,000 miles of shoreline to cast! King Island is located on Sabaskong Bay, on the east side of Lake of the Woods. Sabaskong Bay offers a safe haven, with many bays and hundreds of islands of all shapes and sizes. You can always find safe water here to fish, no matter how hard the wind blows. The rock shorelines are lined with majestic stands of white, red and jack pine and still look much as they did in the time of the early explorers. Lake of the Woods has a reputation as one of the best inland fisheries to be found anywhere. It also offers great variety, as it boasts walleye, muskie, northern pike, small mouth bass, large mouth bass, crappie, perch and lake sturgeon, as well as numerous non-game species.

THE BAY OF HOGS!

In 2007  a friend and I  made the fourteen hour trip up to the fantastic Lake Of  The Woods, Canada in hopes of nailing a trophy Musky. What ensued sort of backs up my thoughts of Northern Pike being bigger up north….. After launching our boat at a Nester Falls boat ramp, we saw a large weed bed just left of the ramp.  We were so anxious to do some fishing, we thought we would make a couple casts  before we headed to our lodge….. I attached a big 13″ Musky lure I designed and built for the trip.  Well, this part of my story short, here is what happened: I made a long cast to the middle of the weed bed. After letting my lure sink a little, we saw a boil near where the lure landed. Something big made a pass at my lure!  I quickly retrieved  it and made another long cast just beyond where we saw the boil….. Bingo!  A  heavy fish attacked my offering like there was no tomorrow.  Thinking that it was a good size Musky, I was pretty excited! I fought the fish for close to a half  hour and finally netted a fat twenty-two pound Northern Pike along with close to five pounds of weeds!  Even though this fish was the biggest Northern I ever caught,  I was stupid enough to think that maybe I would catch a bigger one some day, so I quickly released the beast.  We both thought that the big northern was a sign of  things to come….. Namely a trophy Musky for both of us!  It was getting dark,  so we gunned the motor and headed for our lodge on Sabaskong Bay.

This Is The Rest Of My Story:

After a good nights sleep, we had a quick breakfast and headed out to a spot that we thought might hold a trophy fish.  It turns out that it was the day that will live in infamy! We made a few casts with nothing to show.  I thought that maybe  the fish were a little deeper, so I decided to put a half-ounce weight in front of the blades on my bucktail…..I made a long cast, let the lure sink about five seconds and started to make my retrieve.  I felt a jolt, set the hooks, and after a short battle we netted the Musky.  It weighed  in at just over  32 pounds and was 52 inches in length…..The trophy reluctantly fell to the bottom of my boat with a black Mepps Musky Killer bucktail in its powerful jaws!  I released the hefty girl so that in the future it could grow to over forty pounds, and be caught by me or even another Musky hunter. This accomplishment of bagging a 30 pound class Musky is something that is not shared by many.  It took me over 25 years to hook and land such a trophy Musky. 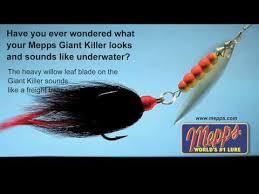 The black Musky Killer above is like the one I took my trophy on:

Over the next few days we caught some undersized fish,  a friend caught a 22 lb’der that he kept to have mounted. On one occasion, a musky the size of a six foot log hit my lure,  but as luck would have it, the  enormous monster broke my lure it its jaws, and swam away with no regrets. As usual, the really big Muskies always seem to get away. It’s enough to make a grown Musky Hunter cry!!

On a previous trip, a friend caught two 32 lb Muskies just two hours apart at the exact same spot I got my mine. One of his trophies was nailed on a white Mepps Musky Killer, and the other on a black Musky killer!  Fact is, we thought he was trying to fool us by showing  the same fish twice. The joke was over when he pulled another one up out of the water that he had on a stringer. We were all in shock!

That trip was one for the books! Altogether, our group caught three trophies in the 52″- 32 lb range, and a 22 lb’der about 47 inches.  The peanut legal was caught in about eight inches of water on a black Suick, just adjacent to a small creek coming into the lake. The other three trophies were all caught on Muskie Killers. All of the fish were deep next to a big boulder, not fifteen feet apart.  So much for the Myth that muskies are loners!