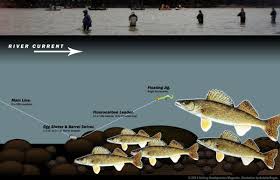 There are probably more  articles written about walleye fishing than there are walleyes!!  This article will be nothing new to most walleye fisherman, but for some it might help a little…..

Walleye, walleyed pike, eye, marble eye, pikeperch, yellow, or even pickerel…..Call them what you will! The Walleye, is without question, one of the most sought after fresh water fish in the country.  I think Walleyes are the best eating freshwater fish of all.  Indeed trolling  for Walleyes has really caught on with the inventions of  leadcore line, planer boards and downriggers. However,  I think “DOING THE JIG” is the most fun of all in your quest for the tasty devils!

You might think, “What is the big deal about fishing for Eyes with jigs?”

The truth is that when I see a fisherman lugging a big ass tackle box stuffed with plugs, spoons, spinners and the like, I know that the Walleyes have nothing to fear. Although, when I see someone with a small  plastic box with a dozen or so small lead head jigs, I figure that Walleyes have something to worry about and should hide in some thick weed bed!

It’s no secret that jig fishing is a deadly way to catch Walleyes. Most are designed to imitate minnows or crayfish, the Walleyes favorite foods.  This simple lure is also easy to keep on the bottom where Walleyes spend most of their time. In the spring, when Eyes’ are just recovering from the rigors of spawning and are not yet feeding  actively is the best time to use jigs.

There is something about the action of a hoping jig that entices half-interested Walleyes to strike. Maybe the erratic movement resembles an injured minnow. Whatever the reason, the hoping action draws more strikes than the steady wobbling of a plug or even the swimming motion of a live minnow.

Years ago, I fished with a friend that could catch a Walleye fishing in a bathtub!  Even at the best Walleye lakes,  I remember flipping everything in my arsenal hour after hour with nothing to show for my efforts.  My friend continued to catch lots of  fish in spots where I would not even think twice about.  After fishing with him on several fishing trips, I finally figured out the secret of his success.  It was the presentation he was giving the jig….. He was using  a 5 1/2 foot stiff butted rod with a light tip. The light tip was allowing him to detect the slightest tap (strike) on the jig, and the stiff butt made it better to set the hook.  One day, I got so pissed watching him take fish after fish,  I could no longer stand it!   When asked,  he told me that most of the time a Walleye hits when the jig is sinking, and it is essential to keep the line taught all the way to the bottom. This lets you detect even a slight tap signaling a strike.

I bought the right type of rod, and  finally got the hang of it! In addition to learning the art of jigging, I learned a few more things as well. In the Spring when Walleyes are at depths of 12 feet or less, a lighter jig seems to do best.  Generally a  1/8 ounce jig will do the trick. If the fish are extremely shallow (six feet or less), try a 1/16 ounce one. A lighter jig sinks more slowly than a heaver one.  The action is also more enticing, and a lazy Walleye has more time to strike. Try to avoid using  jigs with big bulky hair…..In the Spring, tipping a jig with a small minnow usually helps, although  a bulky tail can hide the minnow. Use a plain jig head with no dressing at all, (see the pic above) or one with little hair. Another good choice is a Fuzz-E-Grub, that leaves the minnow exposed. Experimentation  with different colors can be vital, although many jig fisherman will use any color, as long as it is yellow!  I prefer fluorescent yellow or chartreuse  most of the time. These colors will catch Walleyes in any type of water, even clear, muddy or bog-stained.  Sometimes darker more subtle colors like black, green and brown work well in extra clear water. Phosphorescent (glow-in-the-dark) jigs are an excellent choice around dusk or in murky waters. In muddy waters, white is sometimes more productive.

During the cold pre-spawn times, males are the first to move into the vicinity of spawning areas. Later when the water temperature gets to the upper 30’s or 40’s. females move in. These cold water fish are lethargic  and will not move very far or fast for baits. During pre-spawn , they tend to stay near the spawning areas and in deeper water. When spawning takes place, they move into shallow hard bottom areas and stay all night, returning to deeper water during daylight hours.  During these times, walleyes hit extra light with a pickup that feels like the bait brushed against an obstruction.

If short hits become a problem, attach a stinger hook!

When you first start fishing for pre spawn and spawning walleyes, don’t be surprised if your jig and minnow  comes back minnowless.  Cold water fish are slicker than pickpockets at cleaning your lure…..Try tying a small treble hook tied to a short length of mono, with the mono tied to the bend of the jig hook. The minnow can then be hooked to the treble hook. The mono should be a little stiff  like 14 0r 17 lb test, so it doesn’t droop to much.  This method will at times screw up the action of the minnow. If you feel it isn’t working well,  try a jig with a longer shaft, keeping the bend closer to the end of the minnow. If nothing works, move to another spot…..chances are you have spooked the tasty little fellows away!

Cold water walleye fishing is not for the faint of heart, but those who dress properly and use the the right tactics may just meet up with a fish of a lifetime! Whether fishing the Great Lakes, tail waters or small inland lakes , hot action awaits…..Go for it!

After the water warms up, another sure fire way that usually works well is the famous “Lindy -Rig”,  with a hypo injected nightcrawler or a minnow…..The trick on this kind of rigging is to make sure that the worm or minnow is keep fresh and alive at all times. With this set up, you can back troll or cast keeping the weight bouncing off the bottom. Sometimes, I use the same action that I use with jigs to things going……Their isn’t a Walleye swimming that resist this method!

Right now, the hottest walleye presentation—bar none—is swimming a 3/8- to 1/2-ounce jig dressed with a four- or five-inch saltwater, soft-plastic swim bait, such as the Berkley Inshore Swim Bait, Power Pogy or large Mister Twister Sassy Shad. While it works well on hard-bottomed, main-lake walleye structure, the jig-and-swim-bait combination works even better-indeed, excels-in and around weeds, especially in midsummer when everyone is lamenting the scarcity of walleye.

Find a deep weedline, the edge of a grassy point or scattered weed clumps with open lanes between the clusters, then back off so that when you cast your jig it lands just inside the ragged edge of vegetation or down one of the corridors. A five-inch boot tail teams up nicely with a 1/2-ounce darter head, while a four-inch swim bait perfectly complements a 3/8-ounce, ball-shaped jig.

The way to retrieve such combinations is simple. After you feel the jig touch bottom, keep your rod tip pointed up and reel in line at a moderate clip so that your jig is swimming a foot or so off the bottom. Just be sure to pause momentarily every once in a while so the lure hesitates and tumbles slightly. That’s usually the trigger for a following walleye to hammer it.

You need a stiff rod and the right line to properly perform this manoeuvre. The ideal combination is a seven-foot-long, medium-heavy-action spinning rod and reel spooled with 15-pound FireLine and a three- to nine-foot-long, 15-pound fluorocarbon leader. The small-diameter, low-stretch, highly sensitive line is important because it not only aids in getting a good hookset, but it also slices, dices and cuts through the weeds.

Tip: Don’t worry if you snag a weed while retrieving a swim bait. Just keep your rod tip pointed skyward as you tighten up on the line and snap the lure smartly. And as a bonus, a walleye will often pounce on the lure when it pops free.

Catching Walleyes on a regular basis is no small task!  There are other things just as important as learning the fine art of jigging…..Learning structure is a big one!  Once you learn those two things, the when becomes elementary and is not as important…..A good Walleye fisherman can usually catch walleyes at any time of the day.

Remember: If people concentrated on the really important things in life, there’d be a shortage of fishing poles.